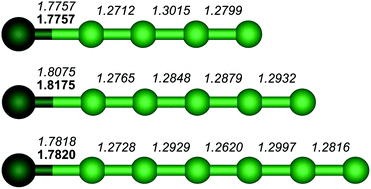 Following the recent discovery of T-shaped GeC2, rotational spectra of three larger Ge carbides, linear GeC4, GeC5, and GeC6 have been observed using chirped pulse and cavity Fourier trans-form microwave spectroscopy and a laser ablation molecule source, guided by new high-level quantum chemical calculations of their molecular structure. Like their isovalent Si-bearing counterparts, Ge carbides with an even number of carbon atoms beyond GeC2 are predicted to possess 1Σ ground electronic states, while odd-numbered carbon chains are generally 3Σ; all are predicted to be highly polar. For the three new molecules detected in this work, rotational lines of four of the five naturally occurring Ge isotopic variants have been observed between 6 and 22 GHz. Combining these measurements with ab initio force fields, the Ge−C bond lengths have been determined to high precision: the derived values of 1.776 Å for GeC4, 1.818 Å for GeC5, and 1.782 Å for GeC6 indicate a double bond between these two atoms. Somewhat surprisingly, the spectrum of GeC5 very closely resembles that of a 1Σ molecule, implying a spin-spin coupling constant λ in excess of 770 GHz for this radical, a likely consequence of the large spin-orbit constant of atomic Ge (∼1000 cm−1). A systematic comparison between the production of SiC$_n$ and GeC$_n$ chains by laser ablation has also been been undertaken. The present work suggests that other large metal-bearing molecules may be amenable to detection by similar means.