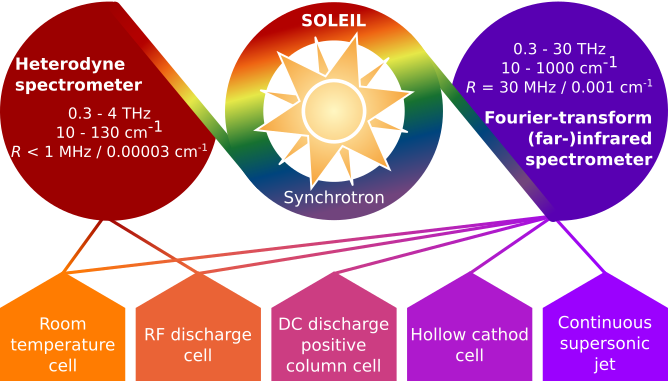 Our team exploits the far infrared synchrotron radiation extracted by the AILES beamline of SOLEIL synchrotron to record and to analyze high resolution absorption spectra of gas-phase species. The spectra are recorded at the ultimate resolution of 30 MHz with a Bruker IFS125 Fourier Transform interferometer, allowing the study of rotational structures of various molecular species. Several experimental set-ups have been developed in association with the AILES beamline and the Bruker interferometer to record high resolution spectra of various molecular species. A room temperature long-absorption path length cell allows the study of relatively large C-bearing species, two discharge cells have been installed to record the far-IR spectra of light radicals and ions, and finally a close collaboration with the Jet-AILES consortium permits to study the spectra of molecular complexes as well as large molecules (containing more than 20 atoms) cooled in a supersonic expansion.

We are also involved in several instrumental developments in particular within the HEROES project. Two new spectrometers, relying on the heterodyne mixing of the synchrotron radiation in various modes of operations with a local oscillator (molecular laser), allow to record absorption spectra with a resolution down to few tens of kHz over the whole the far-infrared spectral range.